We Got to Thank Taylor Swift in Person!

This past weekend was pretty epic! Taylor Swift invited us to her concert and backstage to meet her.  We were so excited to get to thank her for Reid in person.  Reid has changed Jacob's life and our family life so so much.  I don't think that she will ever truly know how much Reid has impacted Jacob.

All week long at the clinic the therapists worked on showing Jacob pictures of Taylor and teaching him to say "Hi Taylor" as well as showing him videos and making social stories of what it would be like at her concert with the flashing lights and sounds. I was more than concerned about how he would handle the concert and waiting in lines, etc.  I went to Party City and bought a bazillion little toys, the clinic printed out pictures of Randall's (the grocery store that he is currently obsessed with) and I had tons of candy all in my purse to use in case of meltdowns.  We ended up needing every single last thing I brought, but it worked!

We got to go backstage before the concert.  When we walked in, Taylor made a sweet comment about Reid being a fluffball and actually didn't try to pet him to my surprise.  His vest has a Do Not Pet sign on it (which I wish I would have removed for her), but I found it so refreshing that she didn't assume she should be allowed to pet him. I TOTALLY would have made an exception for her, but loved that she was so respectful of that. Talk about a celebrity that gets it! 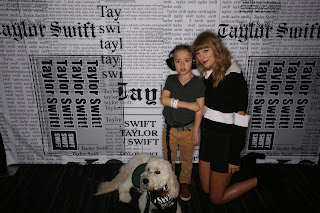 Next, she got on her knees and looked Jacob right in the eyes and thanked HIM for coming to her concert even though she knew it was loud and there was so much going on.  I was so thankful she tried to connect with him instead of talking over him to me.  She saw the boy, not the disability.  Nothing makes me happier than when people chat directly to Jacob. 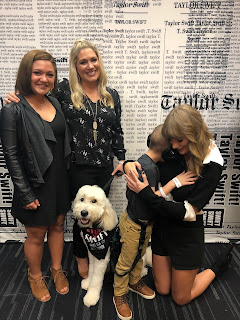 After that, Jacob grabbed her face and pushed her hair back and said loud and clear "Hi Taylor!" and without batting an eyelash she said "Hi".  She didn't act upset about his extreme lack of personal space. Her sweet smile just says it all. After their picture, the flash scared him really badly so he snuggled up with her for our group picture.

Taylor hugged Jordan and I and then even offered for people to take a picture with their cell phones so there wouldn't be another flash.  We were given strict instructions to move quickly and only take one picture, but once she saw that he was having difficulties she told her bodyguards that it was ok and to take more pics.  These are the two they downloaded for me.  Cell phones weren't allowed, probably because people would go nuts in there. She was just kind and understanding.  It was very cool.

The tickets they gave us for the concert were right up front.  Jacob made it through most of the concert and loved it.  He danced to "Shake It Off" and enjoyed the giant drums on stage.  Jordan missed her Homecoming to go, so she wore the dress we bought her with a jacket and had the time of her life.  She was so happy to thank Taylor and meet her and get to experience such a cool night.

It was awesome to be able to thank Taylor in person and tell her how much her gift/Reid means to us.  She is such a super autism advocate. I thank God for these blessings and experiences and cannot wait to see how the Lord uses Reid to help Jacob even more.
Posted by hillfamily5 at 10:25 AM