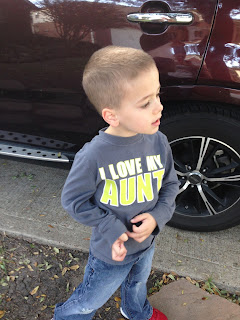 I went to another observation at Jacob's clinic.  The BCBA and his lead therapist told me that they cannot diagnose, but believed Jacob has selective mutism.
From Wikipedia:
Selective mutism (SM) is an anxiety disorder in which a person who is normally capable of speech does not speak in specific situations or to specific people. Selective mutism usually co-exists with shyness or social anxiety.  People with selective mutism stay silent even when the consequences of their silence include shame, social ostracism or even punishment.
Besides lack of speech, other common behaviors and characteristics displayed by selectively mute people include:

I have always known this about Jacob, but contributed it to his autism.  The therapist says that is not the case.  She has worked with many kids on the spectrum and Jacob's issue is different, it goes beyond anxiety when lots of people are around.  Jacob's old therapist even consulted with his new therapist in the beginning to let her know that Jacob has intense times of muteness and she was concerned that they would not see how much he is capable of doing and saying because of this.  Throughout the last 6 months they have observed characteristics in Jacob that they do not see typically with kids on the spectrum.  Jacob will be fully engaged in verbal tasks and then hear a tiny sound, see a door open, or a new person and go completely mute and start showing major signs of anxiety.  He does this with timers, open drawers, all kinds of things. He stops speaking all together in new settings or he will begin aspirating.  This is also different from his adversion to loud sounds where he covers his ears.  This is an anxiety causing him to lock up when he sees new people, things or situations, not just sounds.  It makes me wonder what he is worrying about in that little head of his.  In his observation I was able to see him do it.  He was sitting at the table with his everyday therapist working well.  Then all of sudden he heard a small sound outside of the room.  He stopped talking and started making weird faces and locking up.  Then he began his breathy voice.  The lead therapist told me that this was typical of him when he hears unknown sounds.  He also clams up and doesn't eat well in the lunch room that he is used to when a new person is in the room.  I've seen him do it thousands of times and thought it was an ASD trait and apparently it isn't.  His goes beyond the "norm" for autism if that makes sense.
They have begun a program of desensitizing him, but it looks as if we may need to consult with a speech therapist as well.  I would love to hear from someone who has a child with this diagnosis and what steps you have taken to help reduce anxiety and increase speech.
Speaking of worry...the last couple of weeks have been pretty difficult for me.  It seems like I've been hit with many stressors all at one time.  Its easy to forget that my worry isn't helping anything.  I want so badly to have control over each situation, but I don't.  A good friend invited me to a Casting Crowns concert the other night and they sang a song that I had heard before, but never really listened to.  By the end I was crying because it was such an encouraging reminder.  I wanted to share it for others maybe needing encouragement. God is sovereign.  Let go of your anxiety and trust HIM.
View it here:
https://youtu.be/tIZitK6_IMQ
Hold it all together
Everybody needs you strong
But life hits you out of nowhere
And barely leaves you holding on

And not a tear is wasted
In time, you'll understand
I'm painting beauty with the ashes
Your life is in My hands