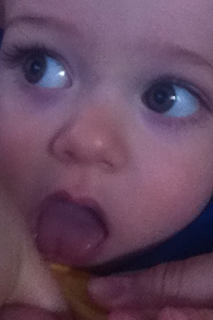 A few months ago we went to the pediatrician and she told us that it was time to have Jacob's tongue clipped.  He was born with a birth defect that people refer to as being tongue tied.  It looks like a snake or heart shaped tongue.  He has very limited range of motion with his tongue.  When he was a baby I went to 2 different ENT doctors to inquire about getting it clipped and both said unless he was losing weight that they wouldn't consider clipping it until he was 2.  Well, a friend referred me to this awesome ENT that I took Jacob to last week and he told me that Jacob has the classic "tongue tied" birth defect.  He said that his tongue was the primary reason Jacob wouldn't nurse as a baby.  With a tongue like his there was no way he could latch.  Ugh...Very frustrating.  My breast milk would have been such awesome nutrition for him.  Anyways, we are having Jacob's surgery to get his tongue clipped on August 1st.  It is a minor surgery, but they will have to fully sedate him, so please be in prayer for this.  The pediatrician told me that this surgery is considered controversial because many doctors were clipping kids who didn't need it.  Therapists can help a child to work around the defect to learn to speak and eat with it, but both the pediatrician and ENT said that with Jacob's developmental delays they don't want any extra obstacles to interfere with his speech.  The ENT also said the surgery is only controversial if the child doesn't need it and Jacob does.  I also read a few blogs of people who had their tongues clipped and many said they wished they'd had it done very early on because it hurt their speech and it looked like a deformity and they couldn't french kiss their spouse with it.  HAHA hopefully I don't have to worry about Jakey french kissing any time soon, but I sure want to give him any advantage I can with his speech and eating.  Jacob currently doesn't eat anything that crumbles in his mouth, like cheese its and crackers.  I think it may be because he can't maneuver his tongue around to feel like he has control of the food in his mouth.  The doctor said that he didn't feel that the tongue was the reason Jacob isn't speaking, but that getting it clipped may help.  I don't love surgery, but I am excited to finally be getting his sweet lil tongue fixed. 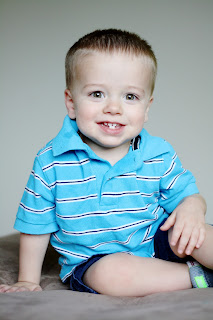 Therapy has been going well.  I am still using all the ABA techniques I have been trained in, but instead of doing all of it in a controlled setting we use it during floor or play time.  Jacob surprised me the other day because the therapist said it was time to move on to a more difficult puzzle than the 3 piece Melissa and Doug puzzles we'd been working on and so I purchased him a 9 piece puzzle (the pieces don't fit all together, they each have their own spot) but he mastered the new puzzle in 1 day!!! Amazing!! I introduced him to a 12 piece that does fit together, but he just threw all the pieces and ran off, so I guess we will keep working on it.  He has started to imitate me a little bit.  When I stomp my feet and ask him to stomp, he does it.  Two days ago, I got on all fours and asked him to crawl with me and he did, but hasn't done it again.  It was so sweet to see him playing with me that way, though.  I love that we are making connections finally.

On a more personal note, I went and saw the movie What to expect when you're expecting and it was so so cute.  I watched as the women had their babies at the end and were holding them gazing at them and I just cried and cried.  It made me so sad for some reason.  I guess I remember when I had Jacob and those connections just weren't there.  I connected immediately with Jordan and Tyler, but I question myself and if I tried as hard as I could to make those connections with Jacob.  I don't know if I did.  It kills me to think about it. Was I the best mom I could possibly be to Jacob in the beginning?   Luckily, I spoke to my sister about it and she reassured me that Jacob was different from the beginning and everyone could see it.  She said that I am trying my best now and that's what matters.  I felt the need to share this because I know every mom out there can relate.  Are there things you regret or wish you'd done in the past for your kids?  Surely there are, but it doesn't help them or yourself to focus on what should have been done.  Focus on being the parent that God wants you to be NOW.  Its never too late to start being the parent that you need to be.  The thing is I can't change all that I did or didn't do and worrying won't help, actually it can only hurt me.  I have to pray for God to give me the strength to be the mom He wants me to be now.  With God's guidance, through the Bible and prayer, I will teach and discipline my children in love and truth.  I have to stop those thoughts of things of the past right when they start coming up.  Sure its hard, but parenting isn't easy.  If I want to give my children all I can, I can't do that being sad, depressed, or anxious about what I didn't do.  That's my current goal.  I am praying for peace about the past, and trying to focus on things of God and how to teach my children all about Him.  I love my family so much and I don't want to take even one second for granted.  I don't want to waste one more minute on my past.