Jacob's Gift To Us 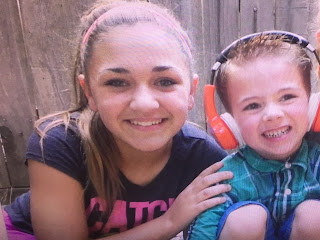 Today is Jacob’s 7th birthday! I can’t believe how big he is and how far he has come.   Over the last year we have seen him learn piano, addition, engage with the boys his age and so much more.  It has truly been a blessing.

The last two weeks, however, have been pretty difficult for him.  Jacob has selective mutism, an anxiety disorder in which he goes completely mute when he’s nervous.  The clinic has begun a tolerance program to help with his mutism.  They are having Jacob speak in each room in the clinic because he only wants to talk in certain places.  It was going well in the beginning until they got to a room that was especially loud.  Jacob hasn’t spoken for days since they started in that room.  Meanwhile, other negative behaviors have increased.  When we show up to pick him up at the end of the day, they won’t allow him to leave until he simply utters a sound like “sh”.  He has been acting out at home and his verbal stemming is becoming extreme.

Many times, when kids with autism are trying to overcome a difficult task, it gets really bad before it gets better like a roller coaster.  Yesterday, he was having extremely bad tantrums and screaming and kicking me.  It’s been making me feel so sad for him and discouraged.  But God, in his awesomeness, provided another amazing opportunity for us to see how God is using this all for His glory.

When Jacob was first diagnosed with autism, he wouldn't talk, make eye contact, or play with Jordan.  It was hard for her.  She realized she would have to talk to Jacob differently than other kids. We hired therapists to come to our home and they worked for hours with Jacob in his room.  I remember day after day Jordan would sit at the door and listen to the therapists doing their work, so she could learn the ways she would need to talk to him to get his attention. When the therapists would leave our house, she would copy all the things they were doing and eventually got Jacob to talk to her.  Still to this day, she uses methods that the therapists use to engage him.  It’s truly a beautiful thing to watch.

Jacob has taught her that she must be smart, kind, and patient with kids with special needs.  She has to treat them with respect and be as silly as can be.

Yesterday she was volunteering with our church for Backyard Bible Clubs. They were playing games with the kids when I noticed a family swinging on the playground. I told her to go and invite them to the club.  When she did, the dad said, “I'm sorry, but my son has Autism, and he doesn't do too well in crowds”.  Of course, this was not a coincidence.  She said that she completely understood and that her brother had autism, too.

Later during music and dancing time, the dad and his son showed up, so she jumped right in to talk to him just as if she was talking to Jacob.  He was sitting in his father’s lap, repeating over and over “Excuse me! Excuse me! Excuse me!” so she said, “Hey buddy, what do you need?” The dad, with shock in his eyes, said to his son, “Look, you got her attention, talk to her” and she and the little boy started talking to each other like they were long lost friends.  They were dancing to the moves of the worship songs and the boy even added some crazy moves of his own, so she did that with him.

At craft time, he took her hand and walked over to that area leaving his dad behind.  While they worked on it, he sat in her lap and gave her a huge hug.  The boy’s dad was crying and said, “I think this is the first time he's ever talked to a stranger”.  After club was over and he took his son home, he even came back out, sobbing, shaking her hand saying thank you so much.

I am so proud of how she treated the little boy.  Isn’t that how we should treat everyone?  With respect, with dignity, with love, with compassion.  I love that they got to hear about the Gospel while feeling genuine kindness from a stranger.

Jacob has taught us all to be a little more patient and silly and kind. He has taught us not to judge those who are different but to treat them with respect.  Even my sister said that when Jordan came up to her quietly to let her know that the little boy had autism, instead of being fearful or uneasy she was ready.  She said, “Because Jacob is who he is, we aren’t scared when others are who they are. Being around Jacob a lot has made us all ready to accept people just as they are”.  Jacob may not realize this, but by just being himself, he is changing people.

I’m so thankful for all the silly moments and the difficult moments.  I’m thankful for the times we must totally learn new ways to do old things and the times when there’s nothing we can do but to pray.

Jacob, you are such a sweet blessing to so many.  You are very loved for just being you.  I pray one day all the stories of how you changed people’s lives will touch your heart.  I pray that you will have a deep and rich relationship with the Lord and use all your struggles and successes to bring Him glory.

Happy birthday Jacob! Thanks for being you!

My son jumped into a boat filled with water, you won't believe what happened next! 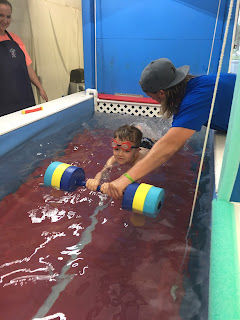 You’ve probably seen some of the viral posts about hairdressers going out of their way for children with autism and sensory difficulties.  They cut their hair on the floor or they go into their car to cut it.  Or how about the waiter that stood up to bullies being mean to an autism family because their child was a little loud?  Today, I read an article about an airline worker who helped an adult with autism who was having a meltdown.  These posts resonate so much with me and I know they do with others as well.

As an autism mom, I see the unsympathetic or pitiful way people look at my son when he is wearing headphones or flapping and making strange noises in public.  Sometimes it can be hard and uncomfortable to be around a child that you may not understand. Working with them is no different.  Doing things outside of the “norm” isn’t how we are trained to behave, right?  In school and in work, we do as we’re told.  So, those few and far between people who go out of their way to do something “unique” for someone else are truly special.

Our swim instructors are just that. Unique.  Coach Matt and Coach Kelley have shown compassion and patience with Jacob.  They are open-minded and willing to adapt to the needs of the kids they work with. Teaching Jakey to swim has been on the top of our priority list, but his resistance to learning, matched with the incredible dangers of a deep pool, have been huge setbacks for teaching him. 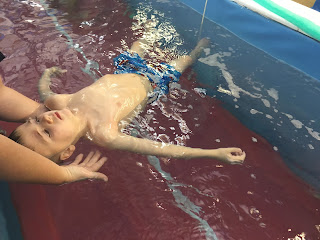 Recently, we found a unique place called Captain Swim Navy in Humble that offers swim lessons in a boat shaped pool that adjusts to the child’s height.  It offers a safe and effective way to train all kids to swim.  But more than that, when I called, Coach Matt said that he WANTED to help kids with autism and asked me to bring Jacob in.  In fact, he was even open to being trained by Jacob’s ABA therapists to better understand how to work with kids with autism.  Although each child is different, he went out of his way and adjusted his teaching methods for Jacob.  Coach Matt and Coach Kelley even learned how to use a picture schedule and token system for him and other kids that need it.
These are the kind of people that may not even realize what a difference they are making in the community and for autism families.  I want to challenge you to think outside of the box the next time you encounter a child with autism at your workplace or in the community.  Be the one who is causing a stir because of your compassion.  Be the one who refuses to conform to how everyone else is responding and instead stepping out to be a change-maker.

I am so thankful that someone has done this for Jacob.  In just a few weeks, he has learned how to float and hold his breath under water for quite a while! Through some innovative and hilarious techniques, Jacob has come much further than we ever expected.  He wasn’t wanting to put his head in the water while doing the alligator crawl, but a mirror did the trick.  He just wanted to see his own beautiful face. What a stinker. I know he will be swimming soon.

Many people may not know that drowning is the leading cause of death in children with autism.  If you haven’t started considering swim lessons for your child, I urge you to call around and find somewhere.  If you are a swim instructor and interested in working with kids with autism, but don’t know how, contact a local ABA Therapy company and ask for training.  Many companies want to reach out and help the community so they have a place to recommend for autism families.  Let’s join together to make this world a bit safer for our kids with autism!