The neurologist called me after I blogged the other day to tell me that she had spoken with the genetic and metabolic specialist at Texas Children’s Hospital and that they suspect Jacob has a rare disease called creatine synthesis disorder AGAT.  His blood work showed that he was low in the amino acid arginine.  To date there have only been 7 reported occurrences of this disease in the world.  This disease can cause autism, self mutilation, mental retardation, severe language delays, epilepsy and heart failure.  It is treatable; however, the treatment has to be carefully monitored as it can cause renal failure.  We are going to Texas Children’s to do more testing to be sure that he has this disease.  From what I have researched, there is a chance that the treatment can improve Jacob’s intellectual delays.  The unfortunate thing is that while it may improve his autistic symptoms, it’s an extremely dangerous disease.  Please be in prayer for Jacob.  If you want more info I copied and pasted info below on the disease:
I got this information off the web page http://www.ncbi.nlm.nih.gov/books/NBK3794/
Disease characteristics. The cerebral creatine deficiency syndromes (CCDS), inborn errors of creatine metabolism, include the two creatine biosynthesis disorders, guanidinoacetate methyltransferase (GAMT) deficiency and L-arginine:glycine amidinotransferase (AGAT or GATM) deficiency, and the creatine transporter (SLC6A8) deficiency. Intellectual disability and seizures are common to all three CCDS. The majority of individuals with GAMT deficiency have a behavior disorder that can include autistic behaviors and self-mutilation; a significant proportion have pyramidal/extrapyramidal findings. Onset is between ages three months and three years. Only seven individuals with AGAT deficiency have been reported. The phenotype of SLC6A8 deficiency in affected males ranges from mild intellectual disability and speech delay to severe intellectual disability, seizures, and behavior disorder; age at diagnosis ranges from two to 66 years. Females heterozygous for SLC6A8 deficiency may have learning and behavior problems.
Diagnosis/testing. Cerebral creatine deficiency in cranial MR spectroscopy (MRS) is the characteristic hallmark of all CCDS. Diagnosis of CCDS relies on: measurement of guanidinoacetate (GAA), creatine, and creatinine in urine and plasma; and molecular genetic testing of the three genes involved, GAMT, GATM, or SLC6A8. If molecular genetic test results are inconclusive, GAMT enzyme activity (in cultured fibroblast or lymphoblasts), GATM enzyme activity (in lymphoblasts), or creatine uptake in cultured fibroblasts can be assessed.
Management. Treatment of manifestations: GAMT deficiency and AGAT deficiency are treated with oral creatine monohydrate to increase cerebral creatine levels. Treatment of GAMT deficiency may also require supplementation of ornithine and dietary restriction of arginine. In males with SLC6A8 deficiency creatine supplementation alone does not improve clinical outcome and does not result in increased cerebral creatine levels; likewise, high-dose L-arginine and L-glycine supplementation did not improve clinical or biochemical outcome. One female with intractable epilepsy responded to high-dose L-arginine and L-glycine supplementation with cessation of seizures.
Prevention of primary manifestations: Whether early treatment prevents disease manifestations is unknown; however, newborn sibs of individuals with AGAT or GAMT deficiency seem to benefit from early treatment.
Surveillance: In those treated with creatine monohydrate, routine measurement of renal function to detect possible creatine-associated nephropathy is warranted. 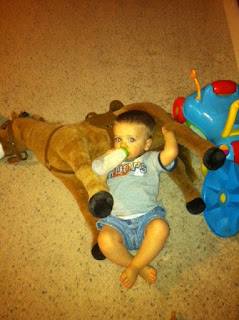 I haven't heard anything about Jacob's latest blood tests yet.  The neurologist said that the tests take anywhere from 2-4 weeks.  Meanwhile, we are praying like crazy for good results.  We have moved in with my mom this week and are trying to get settled in.  We still have a lot of work to complete at our house before the closing Thursday, so we are busy busy this week.

Jacob has started ABA therapy.  It is every day from 8:30-10:30.  So far, she has begun teaching him simple commands like sit down and put in.  He is obeying sit down about 50% of the time in a structured setting.  She is also working on him answering to his name (which is below 5%), matching, eye contact, etc.  Sometimes I hear him crying and crying in there and it takes a lot to not run in and "save" him, but I know this hard work will pay off.  They use an error proof system.  The therapist said that if you are teaching him the difference between a ball and a train and you ask him where the train is, and he grabs the ball, then he isn't learning as much.  Instead, we hold each one in a hand and when we ask him where is the train, we hold the train closer to him.  We only use a praising system when he gets the correct answer instead of saying no to the wrong answer.  This is because some children with disabilities don't understand no.  All they know is they are getting attention, so they may seek out the behavior or actions that caused the no.  ABA is extremely structured.  I have seen more results in a few weeks than I have in months with ECI.  However, I am still very thankful for ECI.  Partly, I feel that the positive results are from the structure and that they come for 2 hours every day.  Constant repetition is re-training his little brain.  I am excited to see what happens in the next few months.  She has also started introducing PECS.  She trained me on what to do with the pictures and I am so happy we may have a way to communicate soon.

The other day I was eating at Schlotsky's in Kingwood with my 3 kids.  A man who works there, who has a disability, came up to us and pointed at Tyler and said, "He has a baby brother now".  Then he went on to say," I had a big brother and he was very nice to me.  I have a disability."  I told him that Jacob has a disability, too.  Then he said," My aid is about to go away and that is NOT RIGHT!"  I agreed.  It sounded as though he was just repeting what he has heard other people telling him, but I could tell he knew what that meant.  I left feeling so sad for him, but so thankful that he had a job and was able to communicate his feelings and totally OK with telling people about his disability.  When I left I decided that the next time I go there I am going to thank the manager for hiring him.  I feel overwhelmed about his situation.  What happens to people with disabilities, that the government doesn't consider major, when their parents can't care for them or when their aid wears out?  What will happen to my little guy if he is not fully able to care for himself and I am not around?  While I don't want to worry about it because that will do no good at all, I do have to consider it and his future.  For now, I feel like the Lord has put it on my heart to really pray for that man.  I ask that you pray for him too and for all the people out there that need aid and aren't receiving it.  Before Jacob was diagnosed I never thought twice about any of this stuff.  Now, I feel like God is putting me in the path of people that I can learn from.  I just don't know how or what I can do about it.  For now, I am just arming people with information.  That's all I can do with everything going on right now, but I hope that making people aware will help in some way.

Praying for you moms out there always.
Posted by hillfamily5 at 10:03 AM No comments: